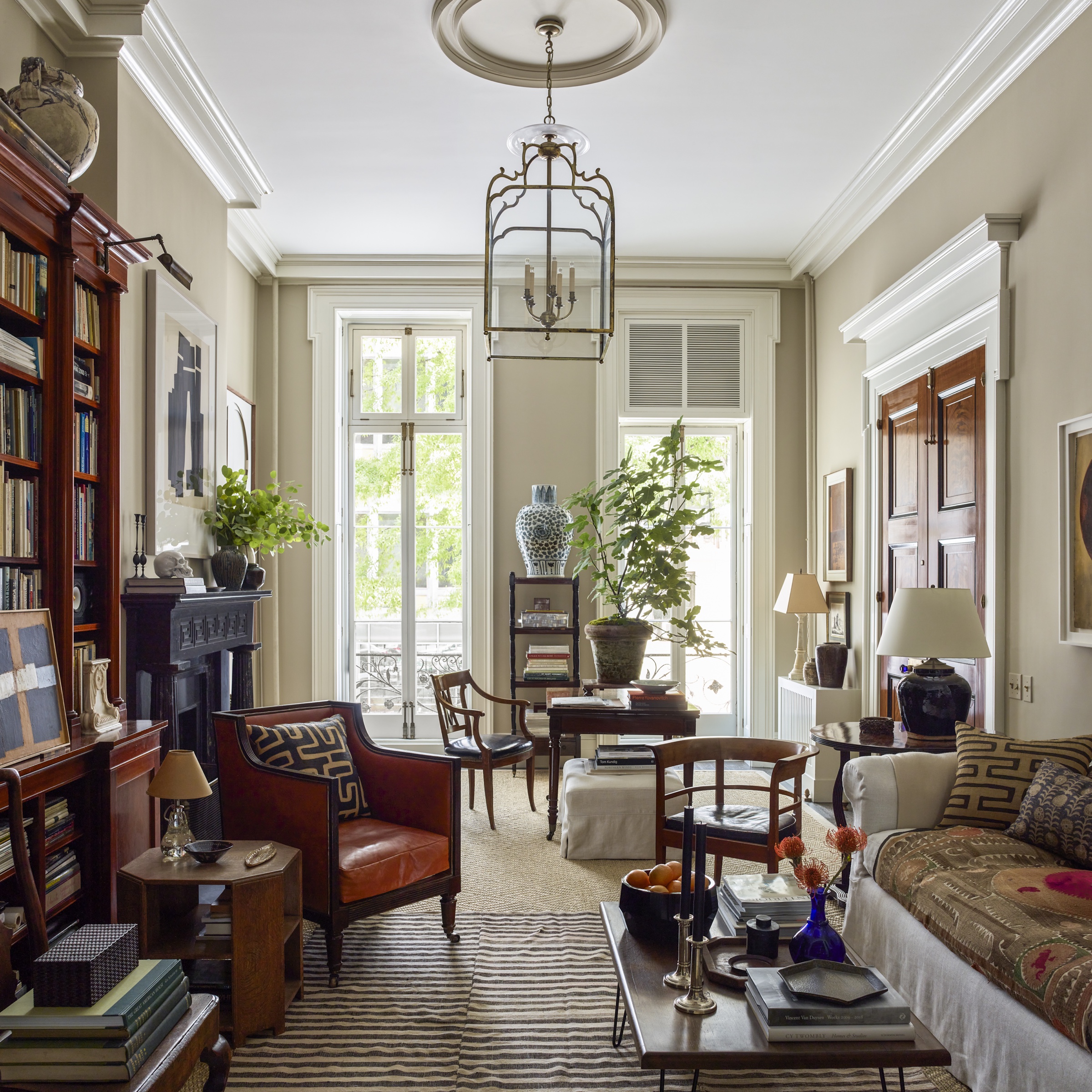 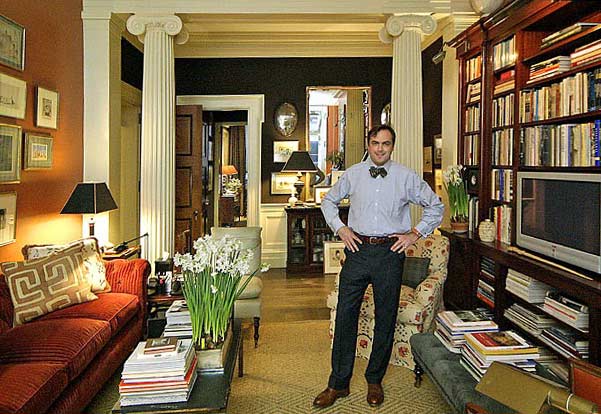 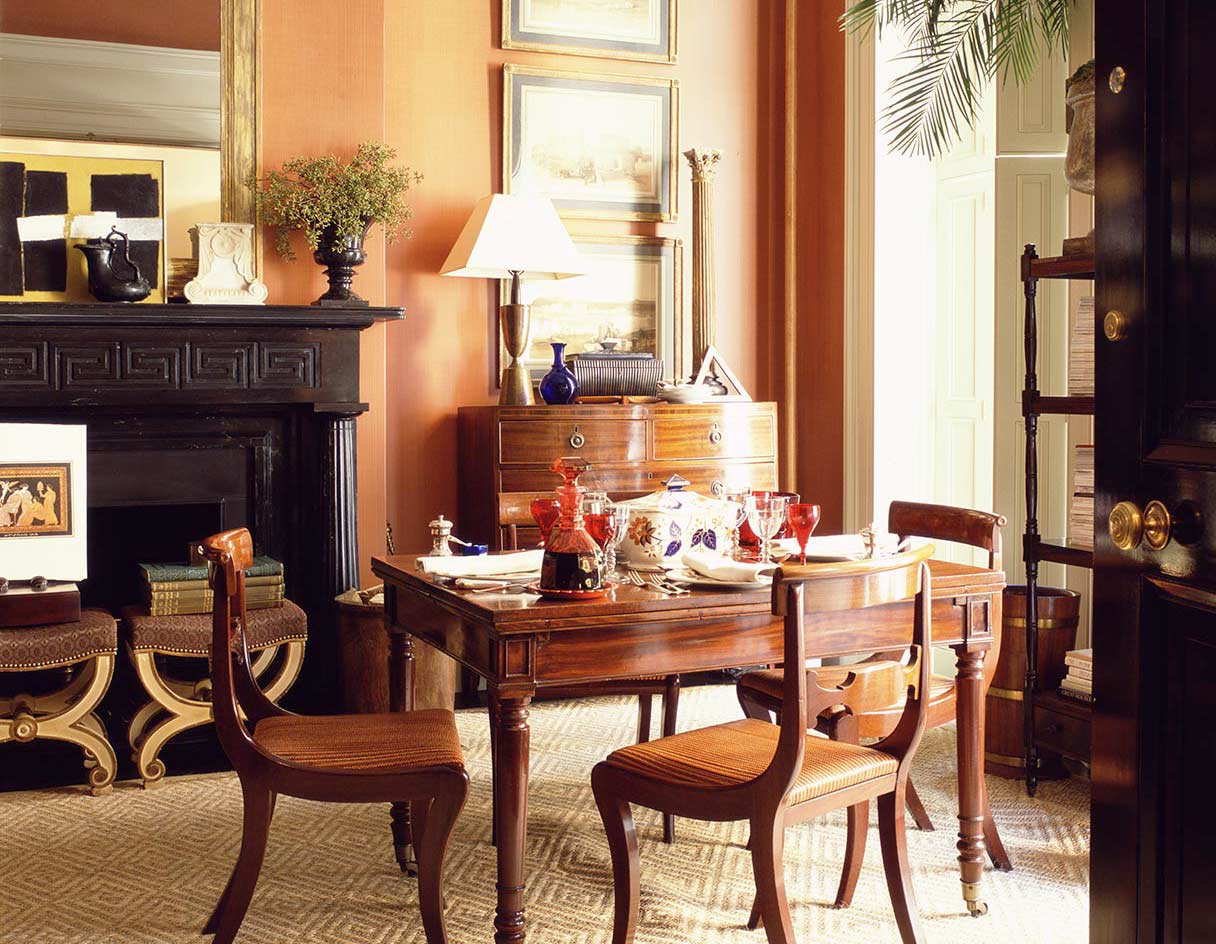 When Gil first purchased and gut-renovated this parlor floor apartment in Greenwich Village over 20 years ago, he conceived every architectural detail as though it were in an original 1840s Greek Revival townhouse. Two stately ionic columns and a custom designed scaglolia mantelpiece define the living room, echoing the Greek Revival moldings, custom-patinated brass hardware, and hand-painted, faux-grained mahogany doors throughout the residence. In a cover story feature in 2004, House & Garden magazine called the renovation “grand” and “elegant.” 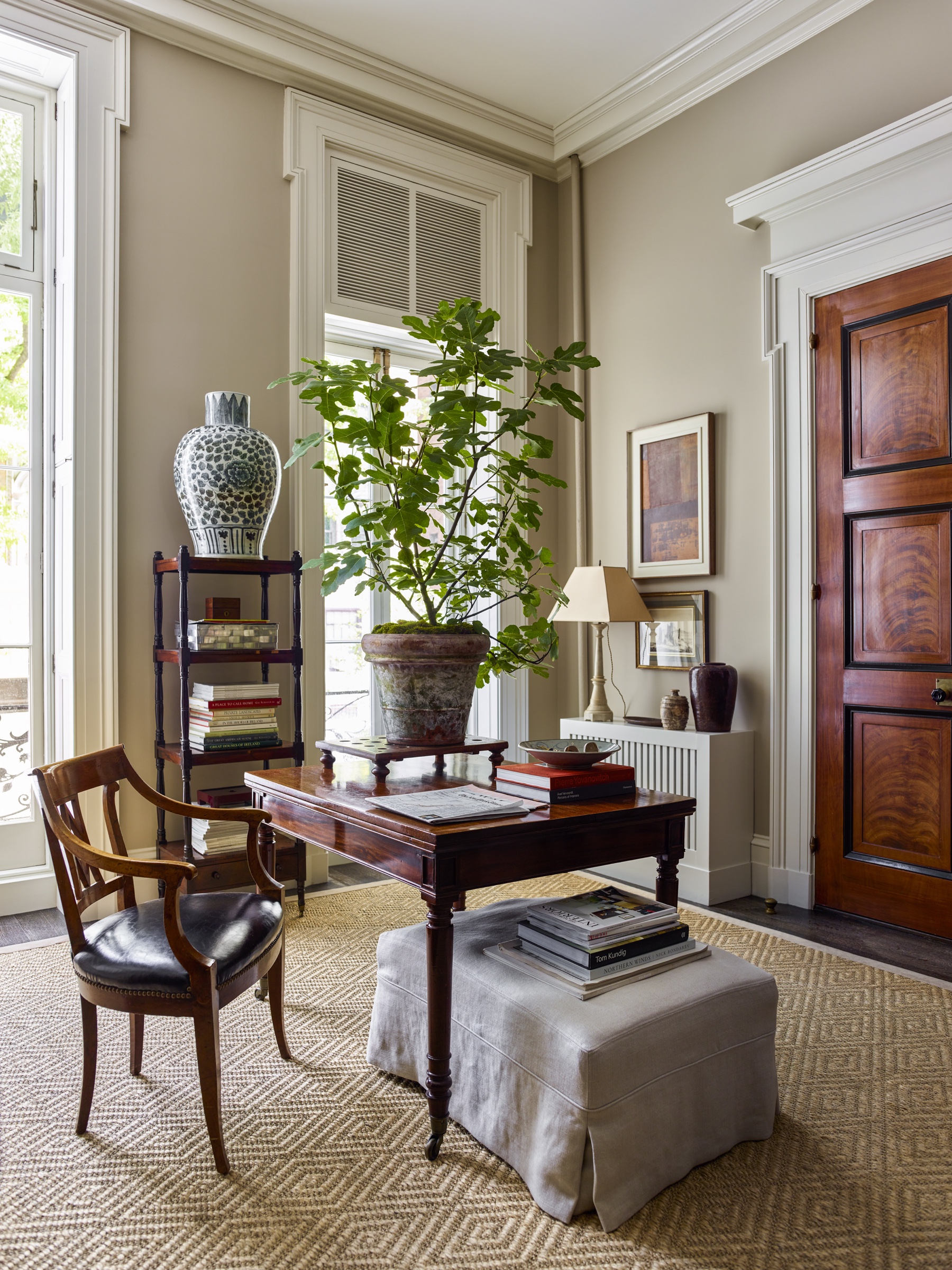 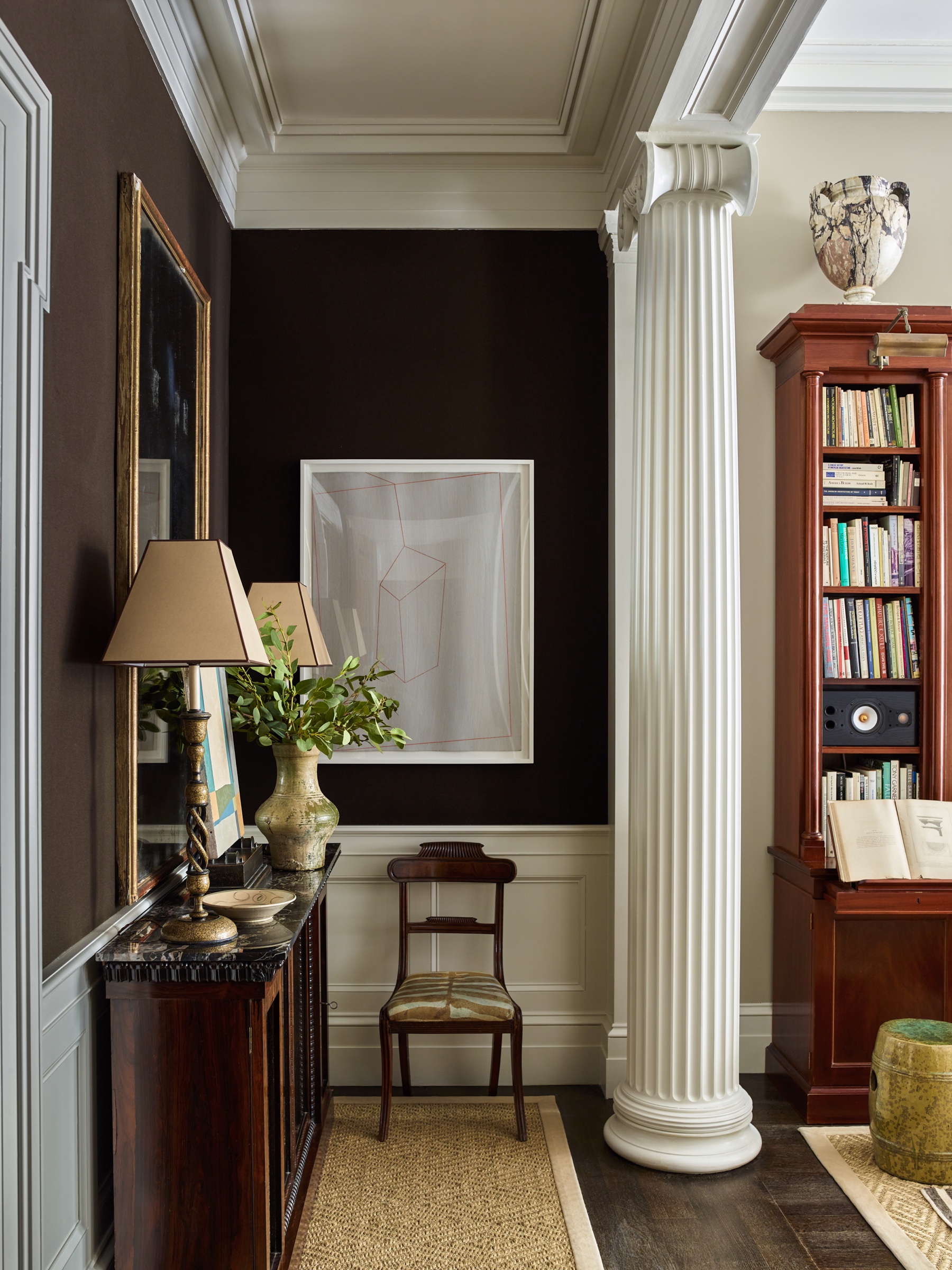 But as his own personal style and design thinking have evolved, Gil has continued experimenting in the space. The latest reimagining of the apartment reflects a nuanced, subtly contemporary aesthetic that fits seamlessly within the traditional, largely-unchanged envelope. 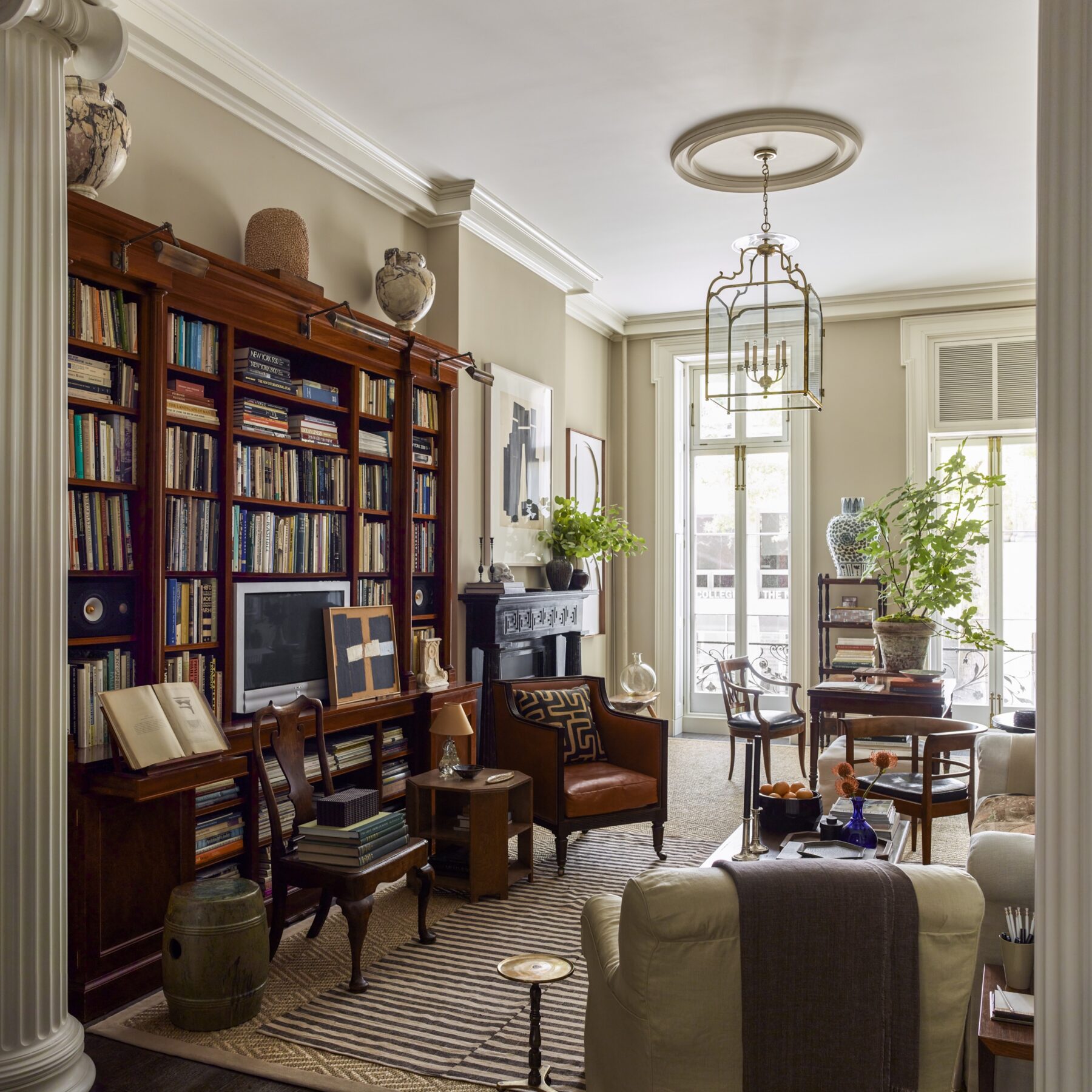 Many of the furnishings have lived in the apartment for years—the regency dining table and leather library chair in the living room were some of the first pieces Gil bought for the space—but are subtly transformed by the lighter, brighter palette and slightly shifted layout. Neutral fabrics mixed with antique textiles and a graphic, black and white Iranian flatweave carpet add an unexpected spark to the more refined period details. 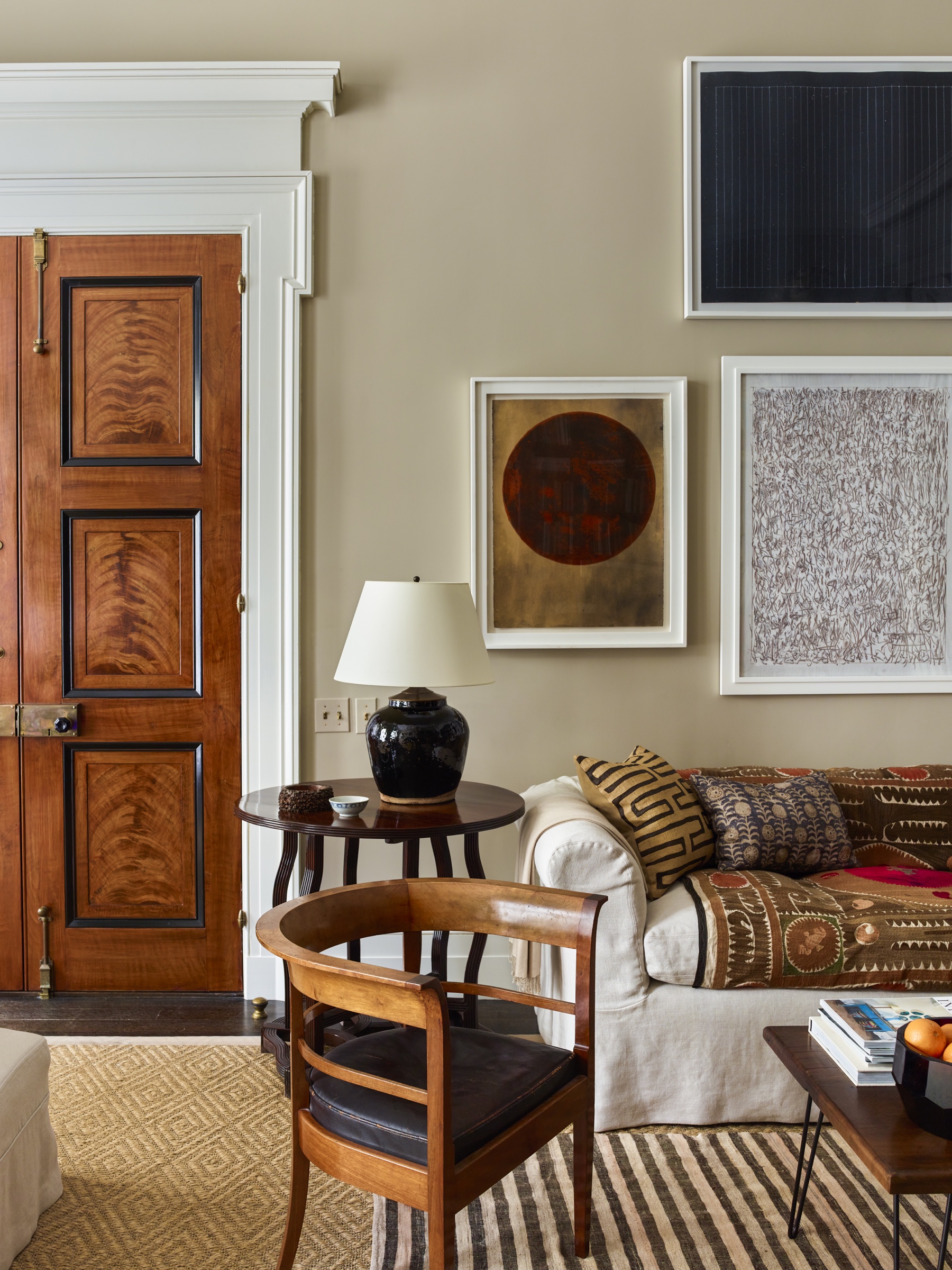 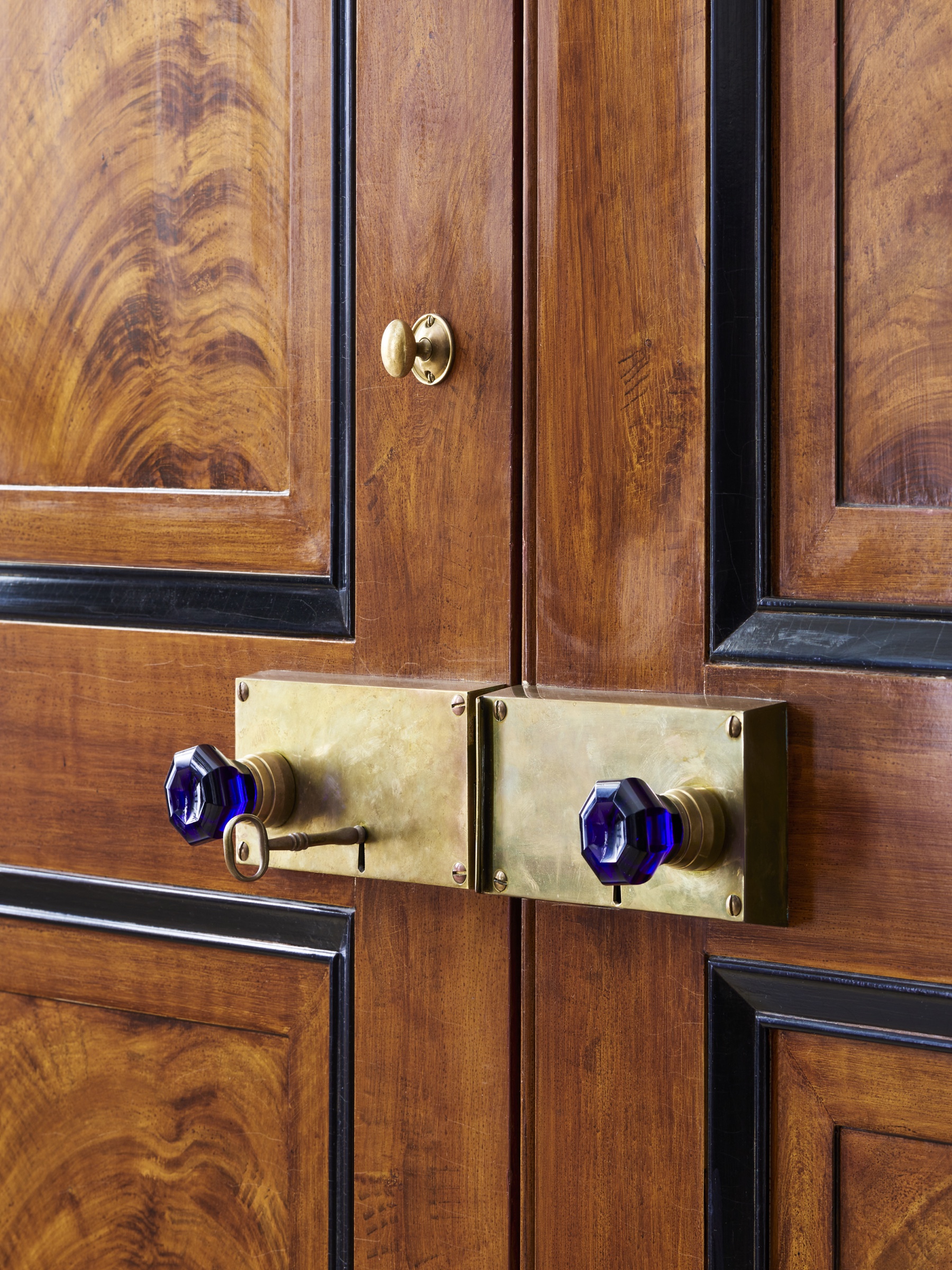 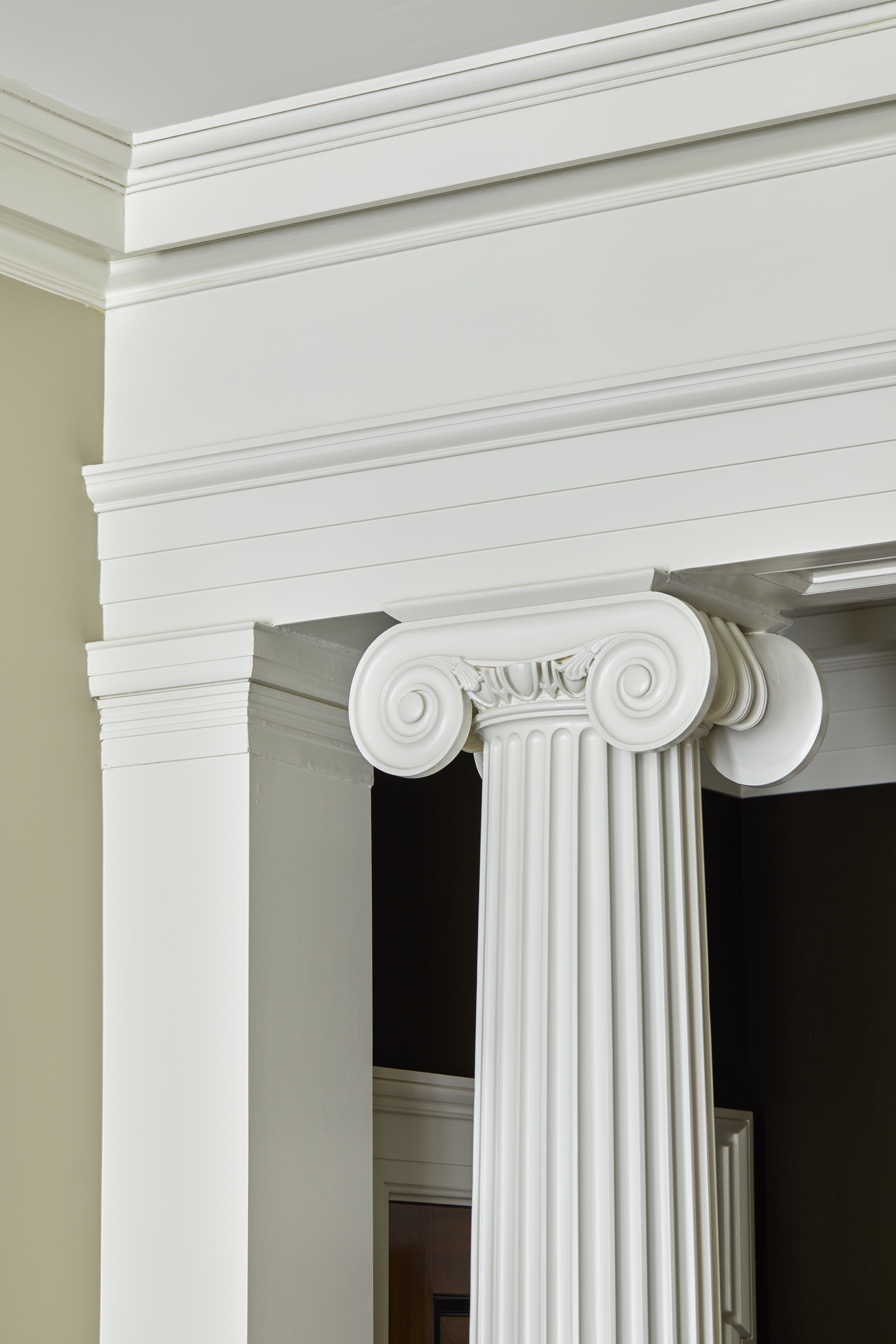 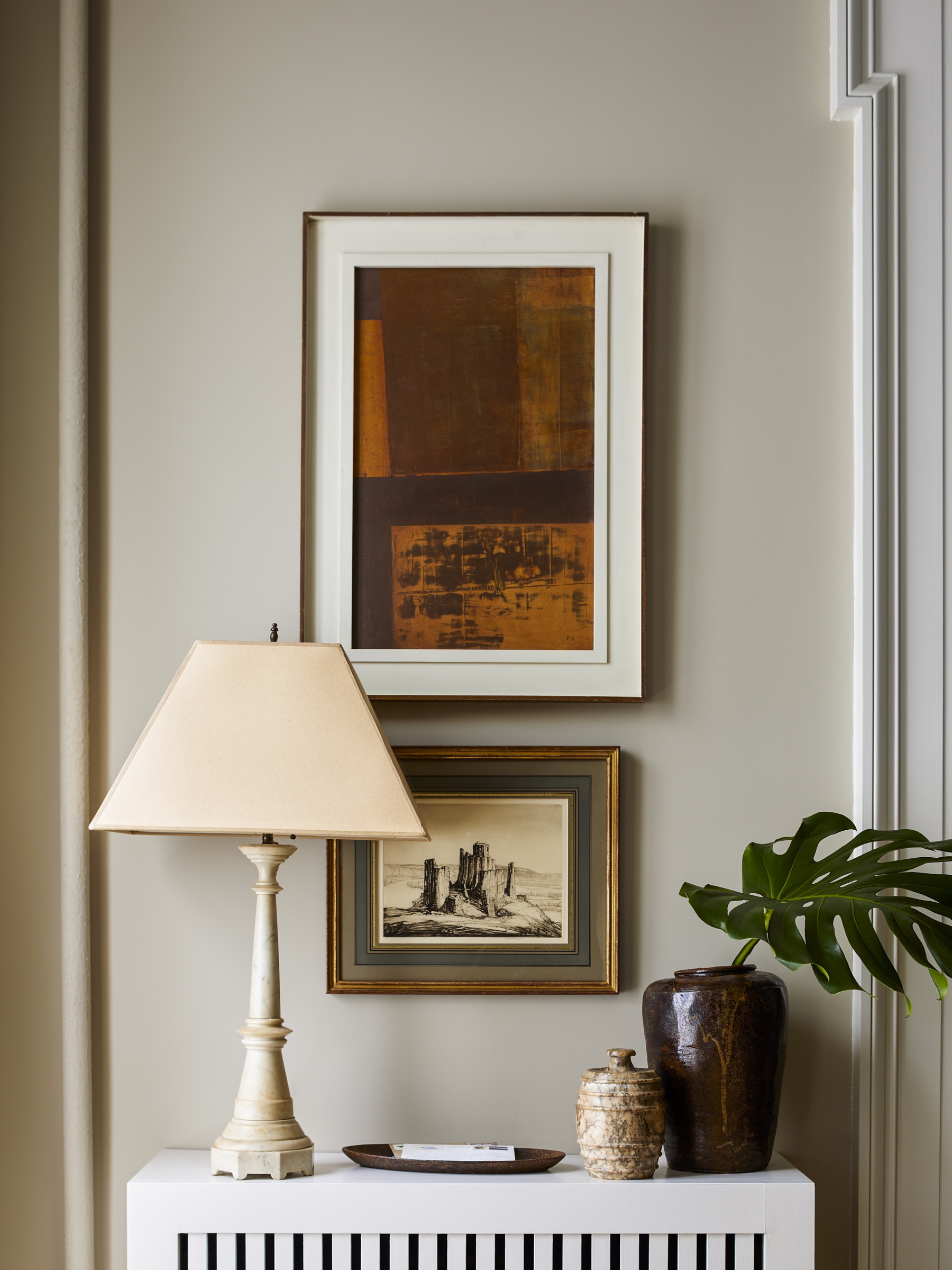 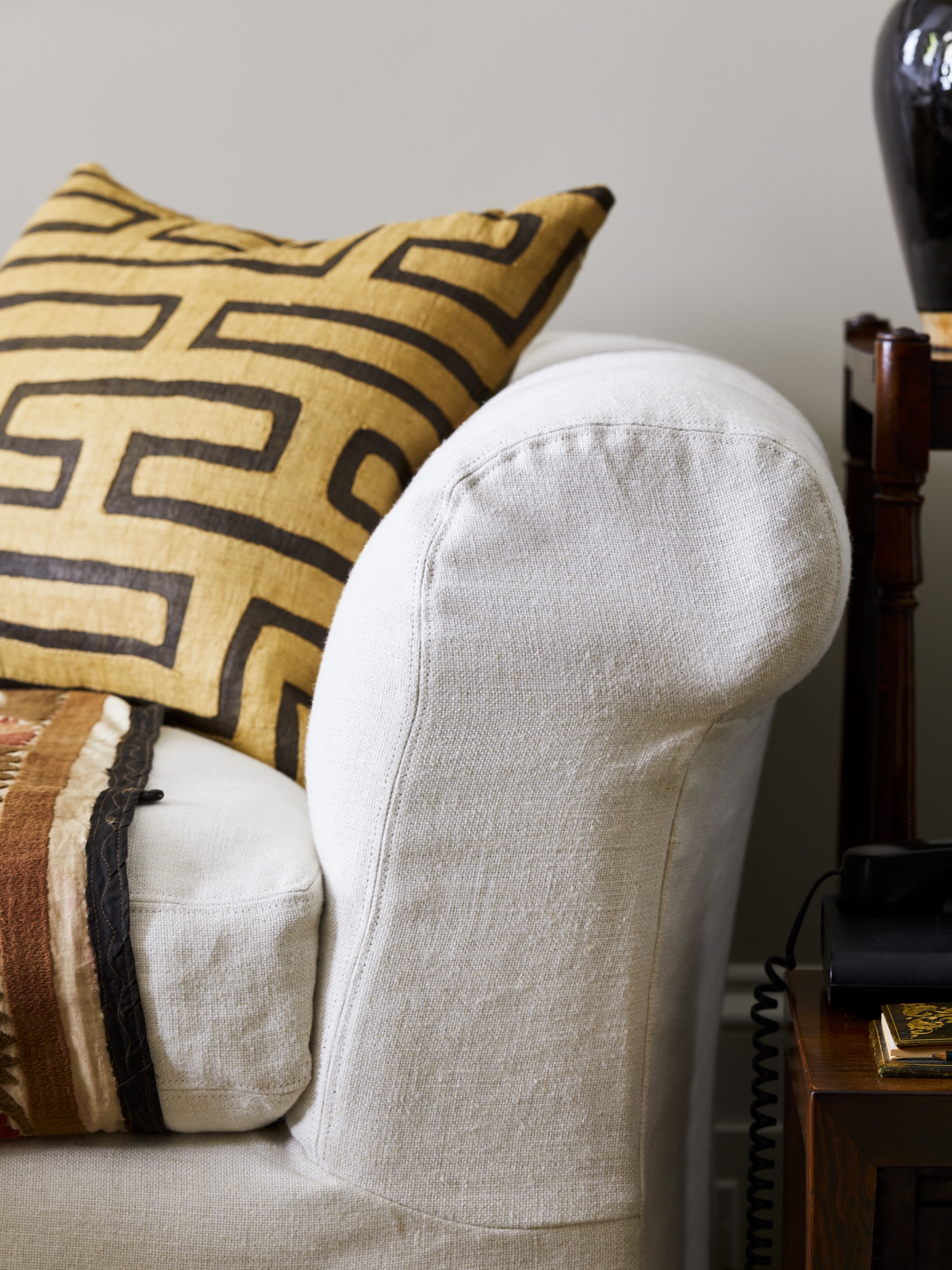 At just 900 square feet, the apartment’s soaring 13-foot ceilings mean there is more square footage on the walls than there is on the floor. Gil accentuated the scale and added a sense of loftiness by painting the living room a dusty neutral Farrow & Ball color while layering on the walls a number of larger scale contemporary works of art that were collected during various professional shopping trips and memorable family vacations. 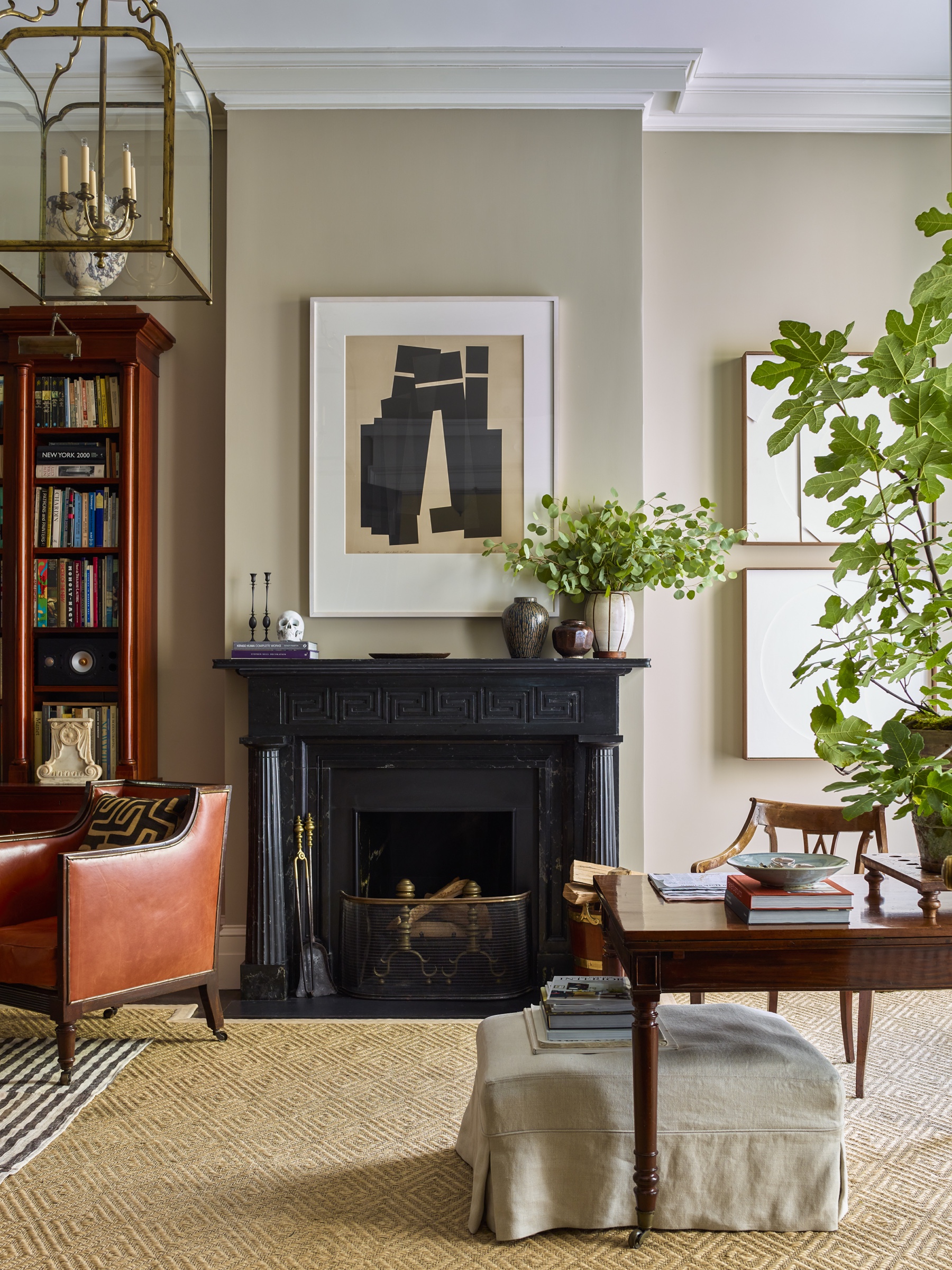 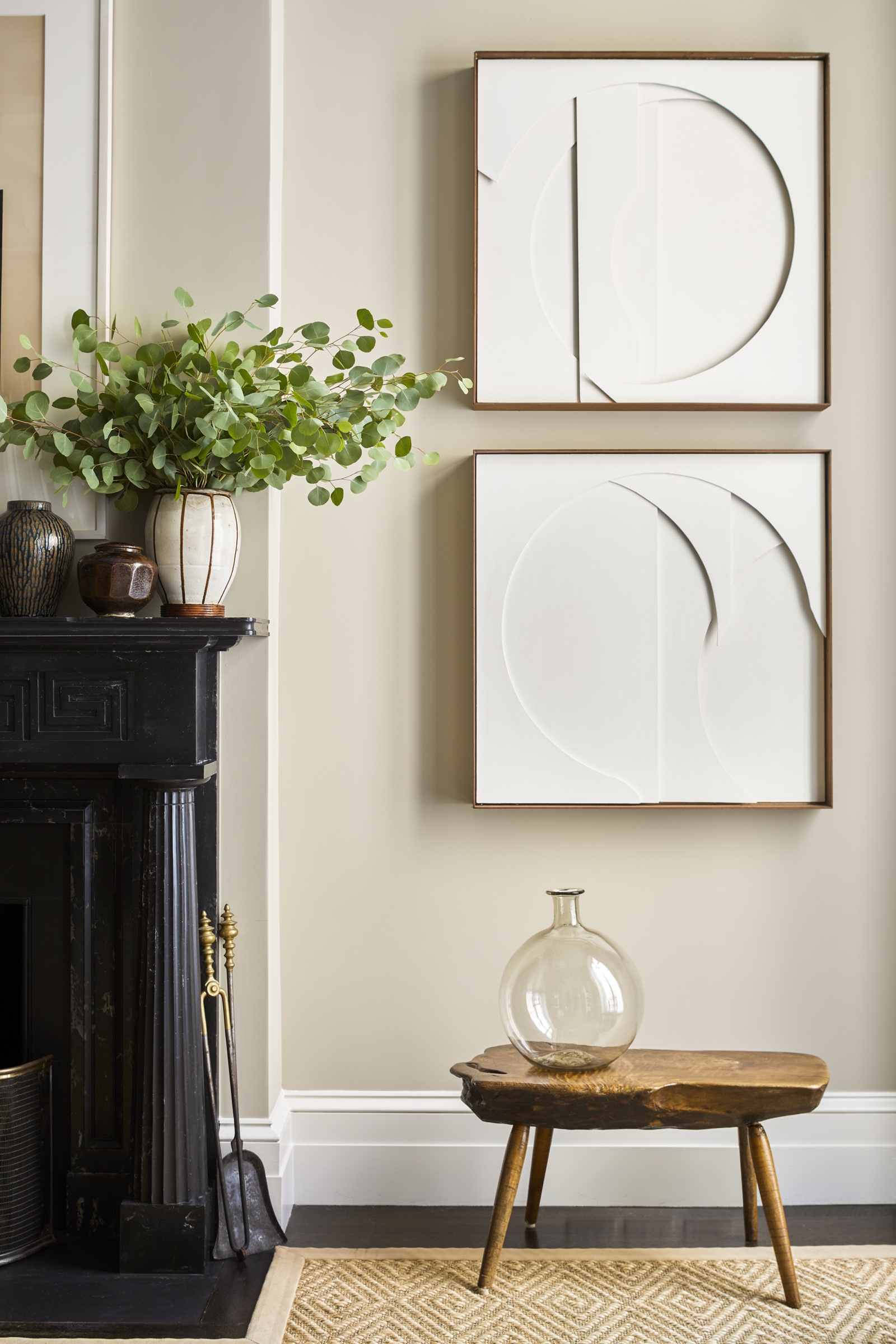 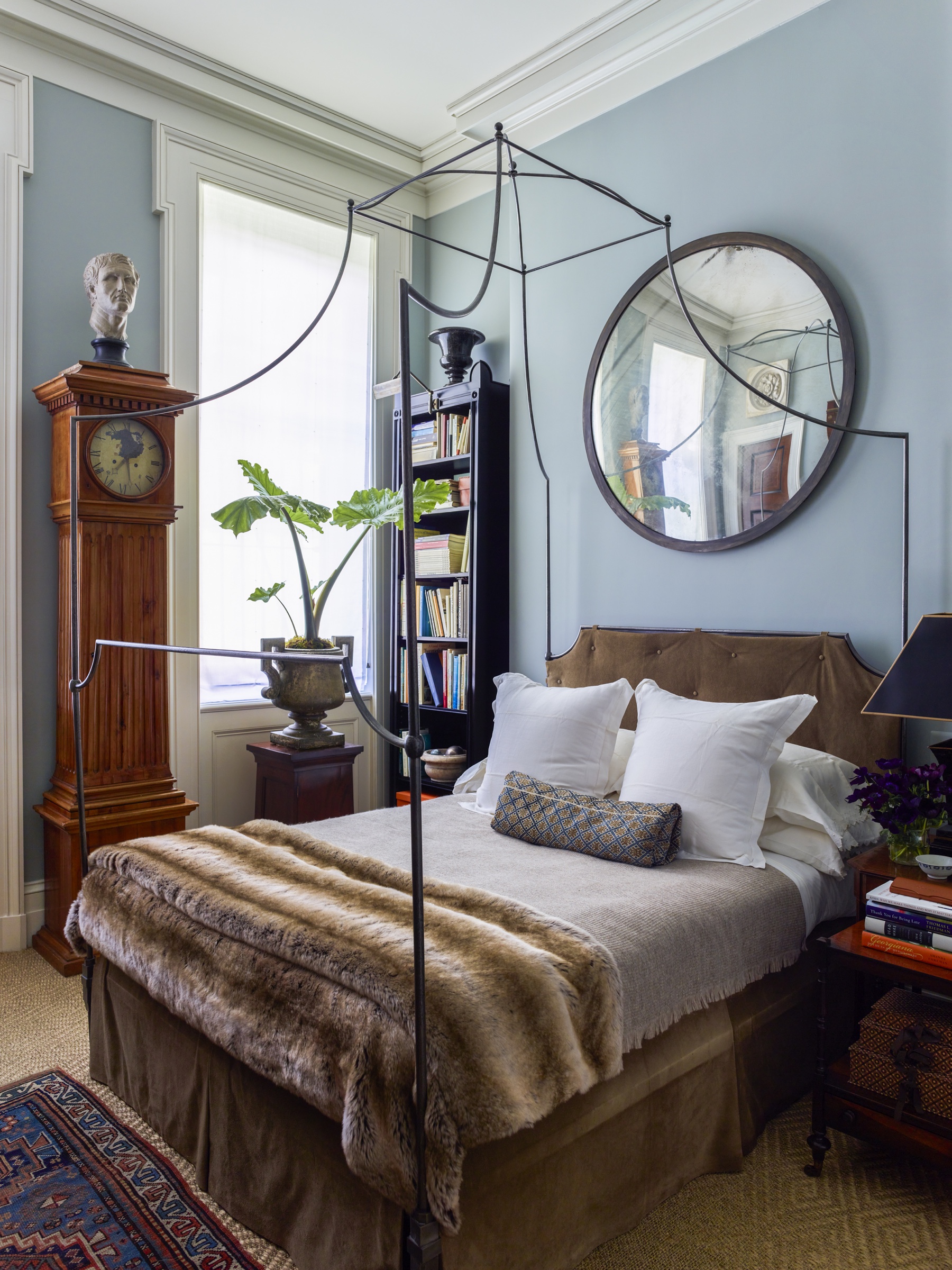 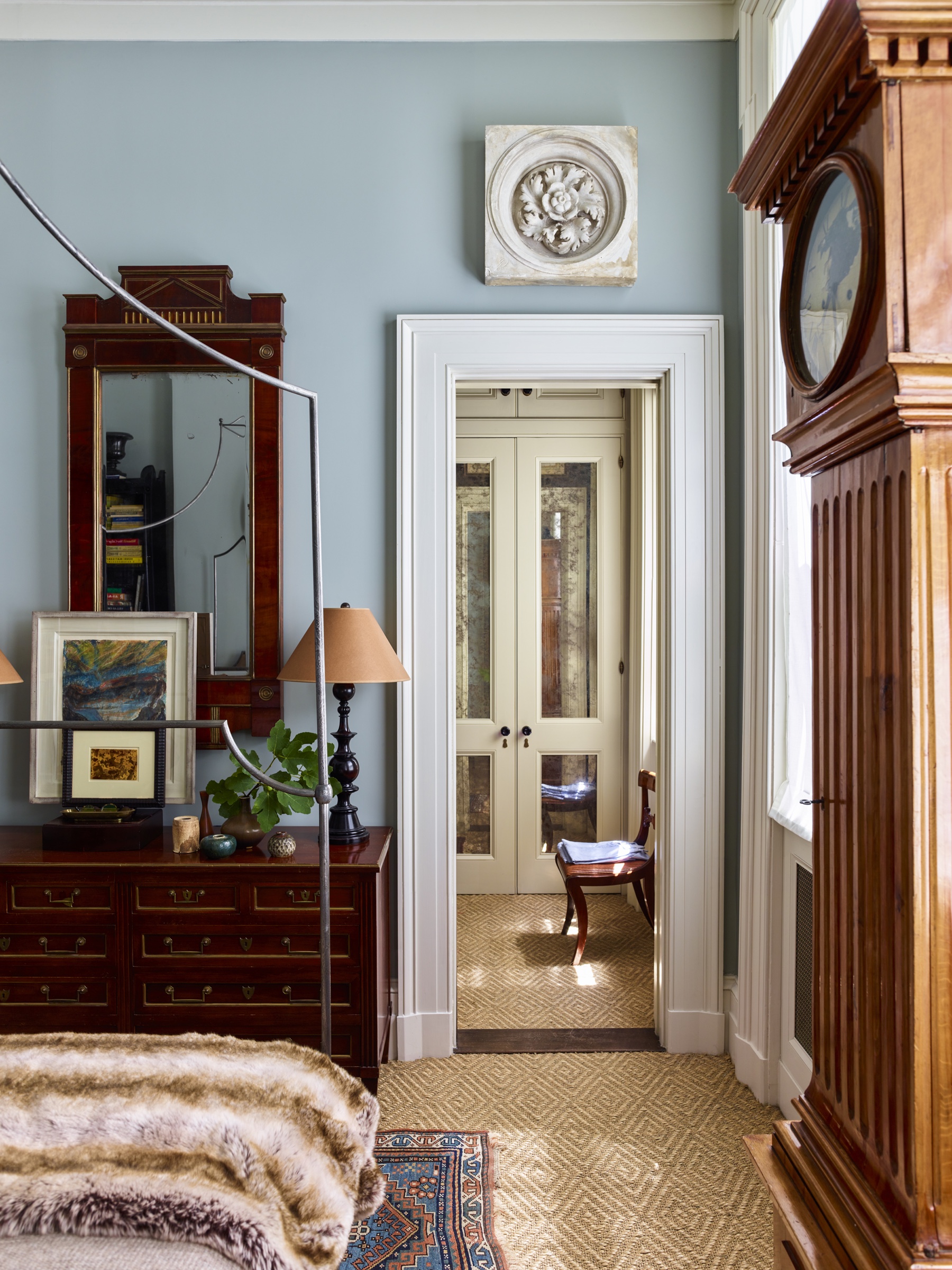 In the bedroom, Gil again focused on creating a sense of airiness by painting the formerly-upholstered walls in a dusty shade of blue-gray, giving new life to the custom designed French campaign bed and bookcases that had originally been made for the room. 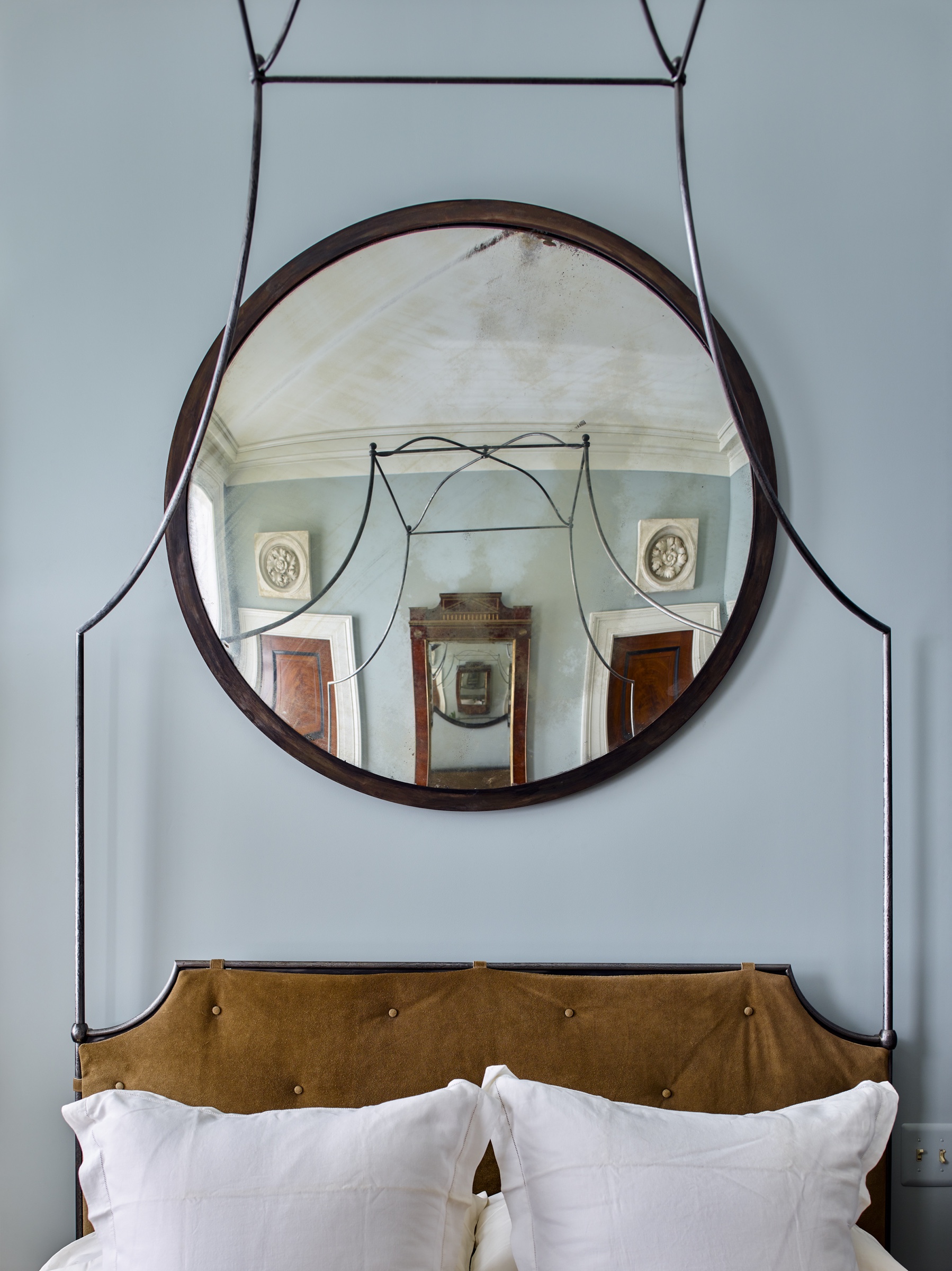 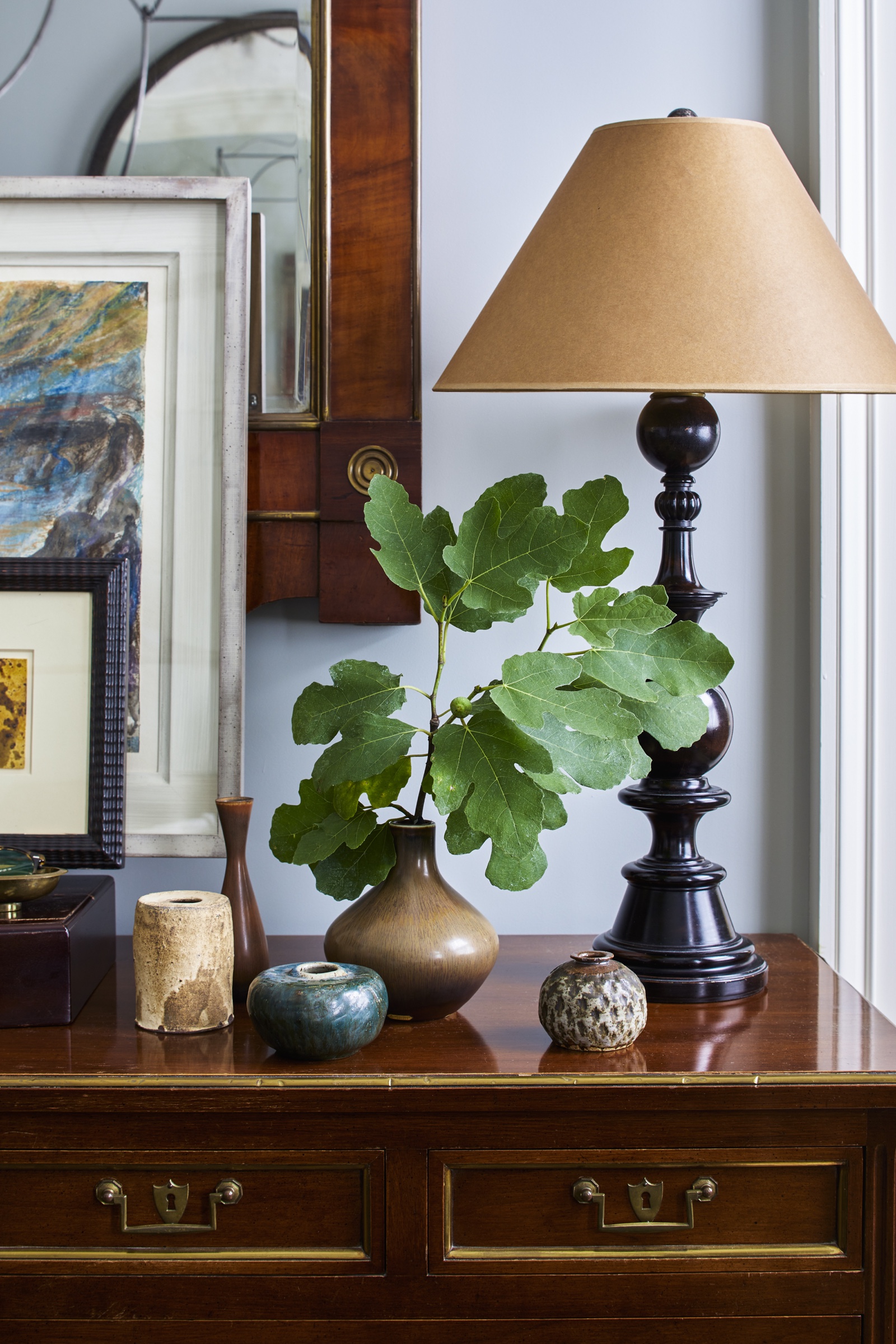 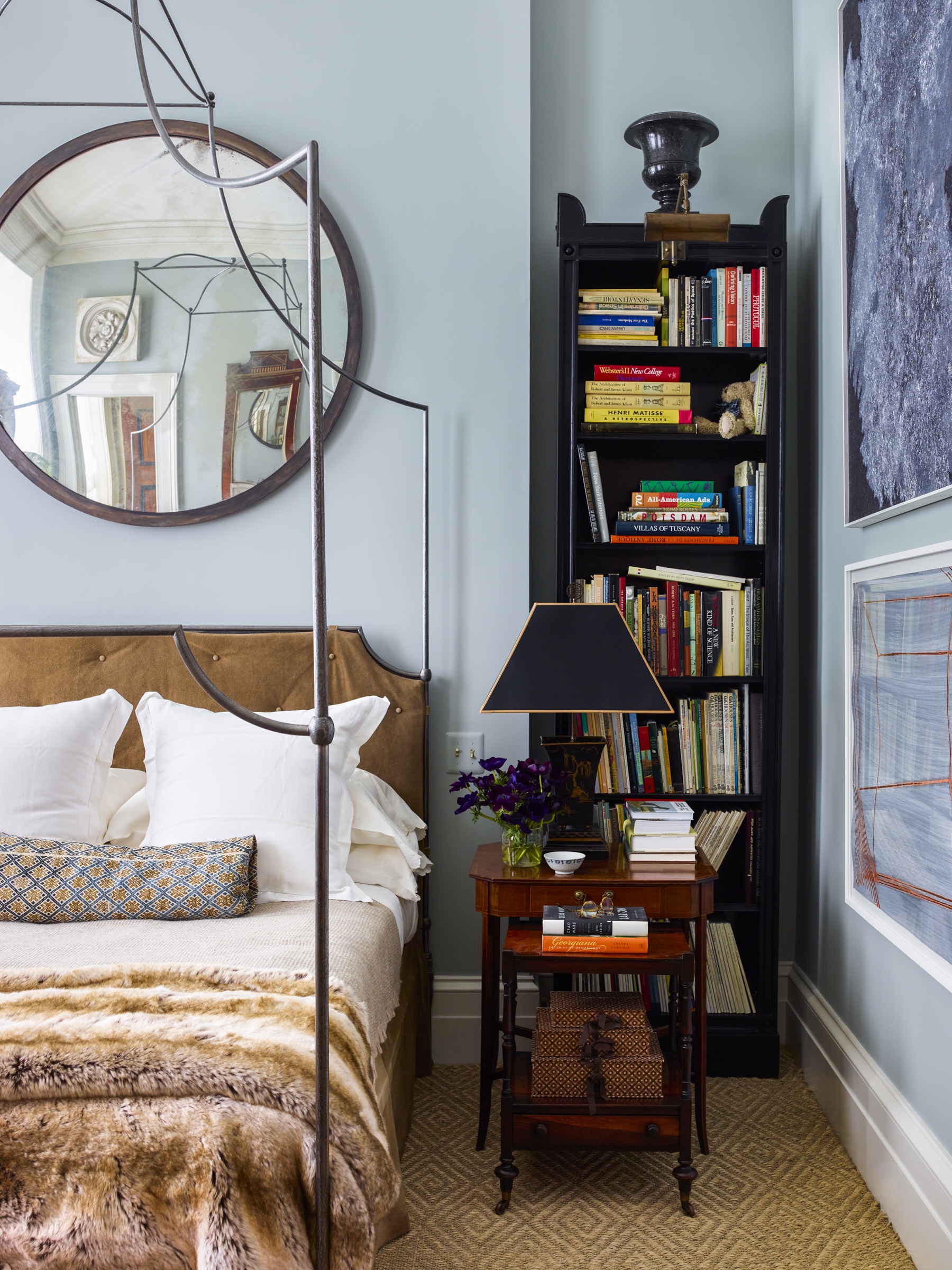 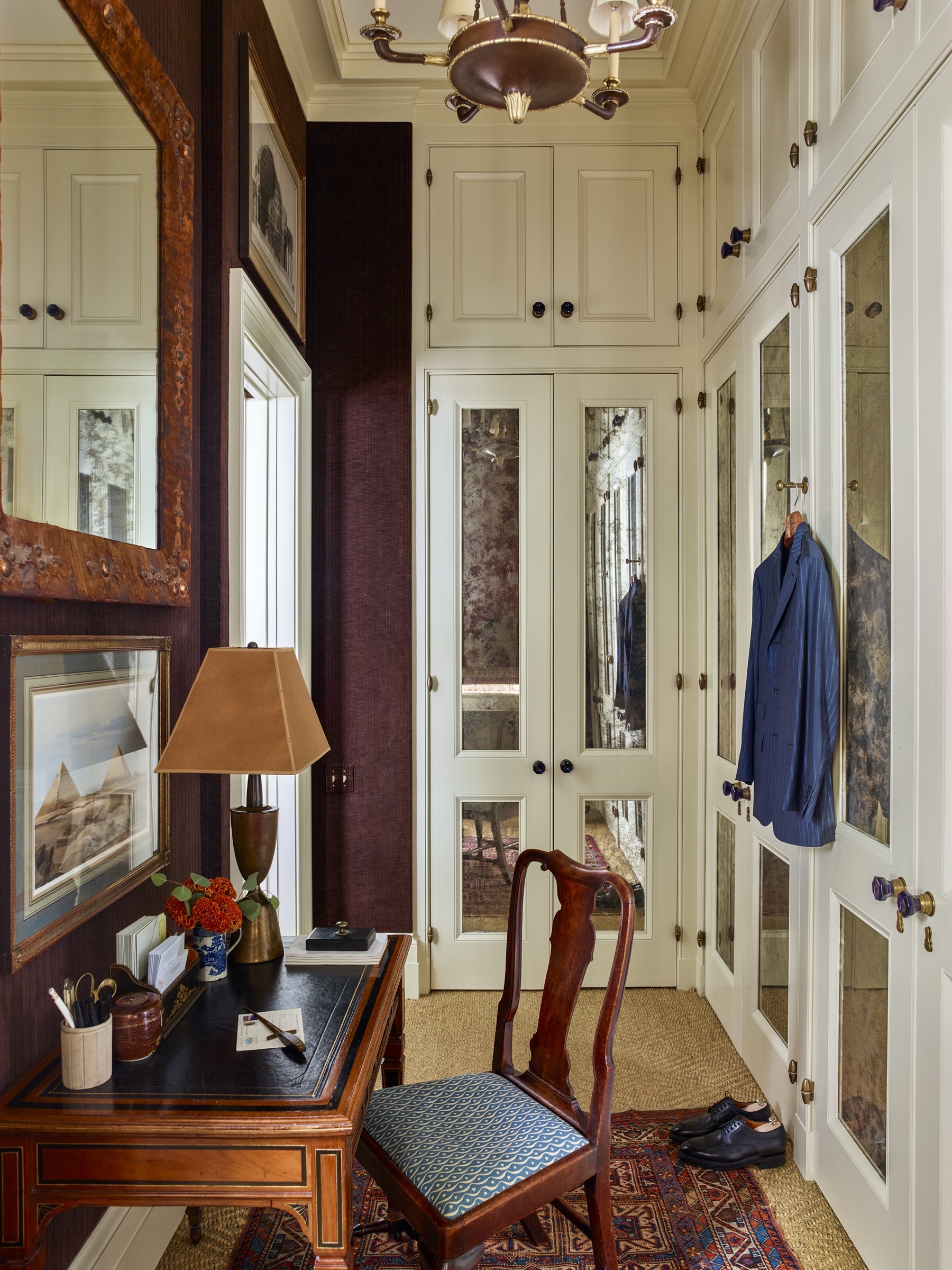 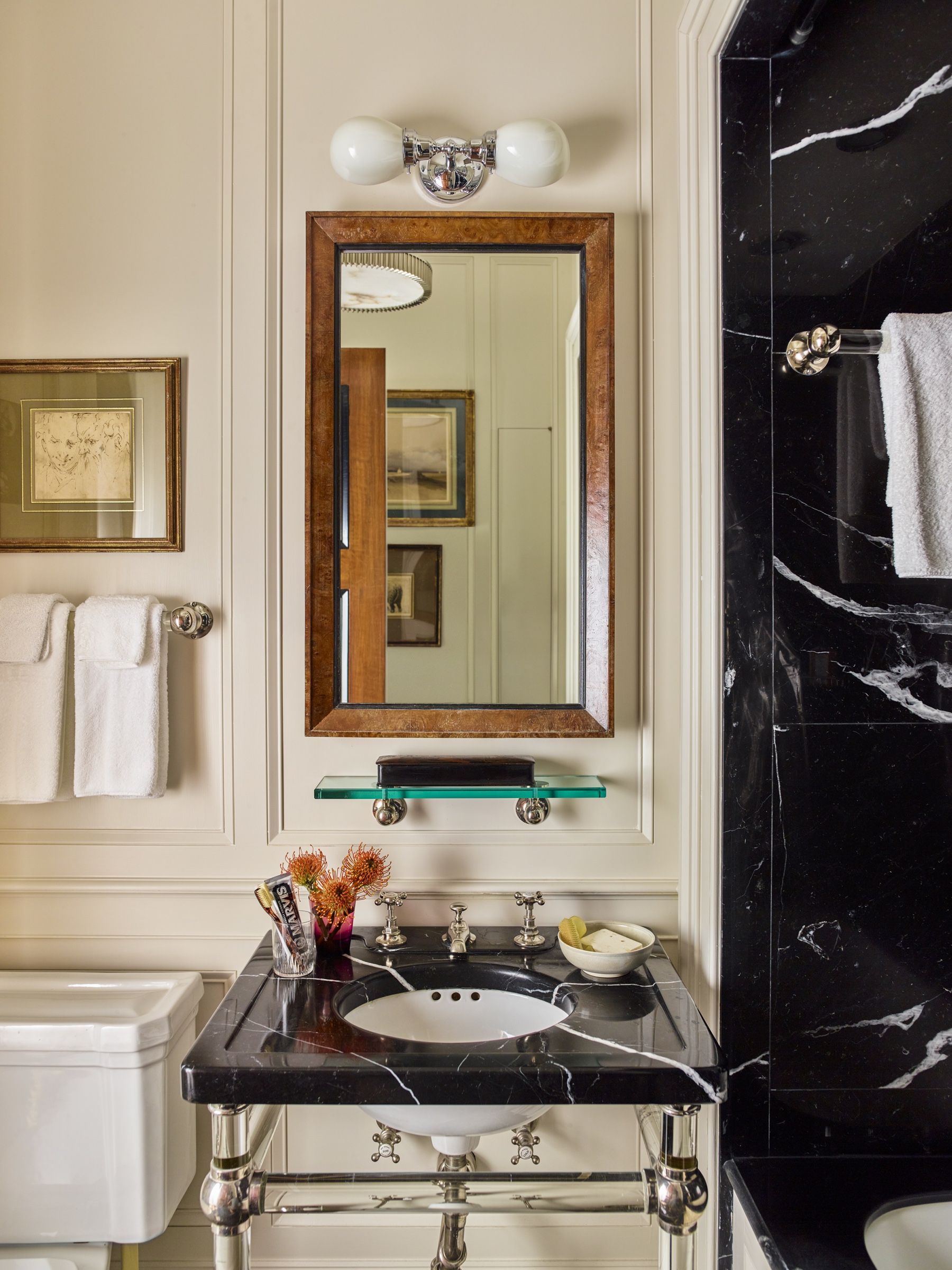 Similarly, a collection of early 20th etchings of New York City views seems perfectly at home lining the hallway as it always has, while architectural engravings hanging on the chocolate brown linen velvet upholstered walls of the dressing room seem as fresh today as they did when Gil first designed the apartment decades ago. 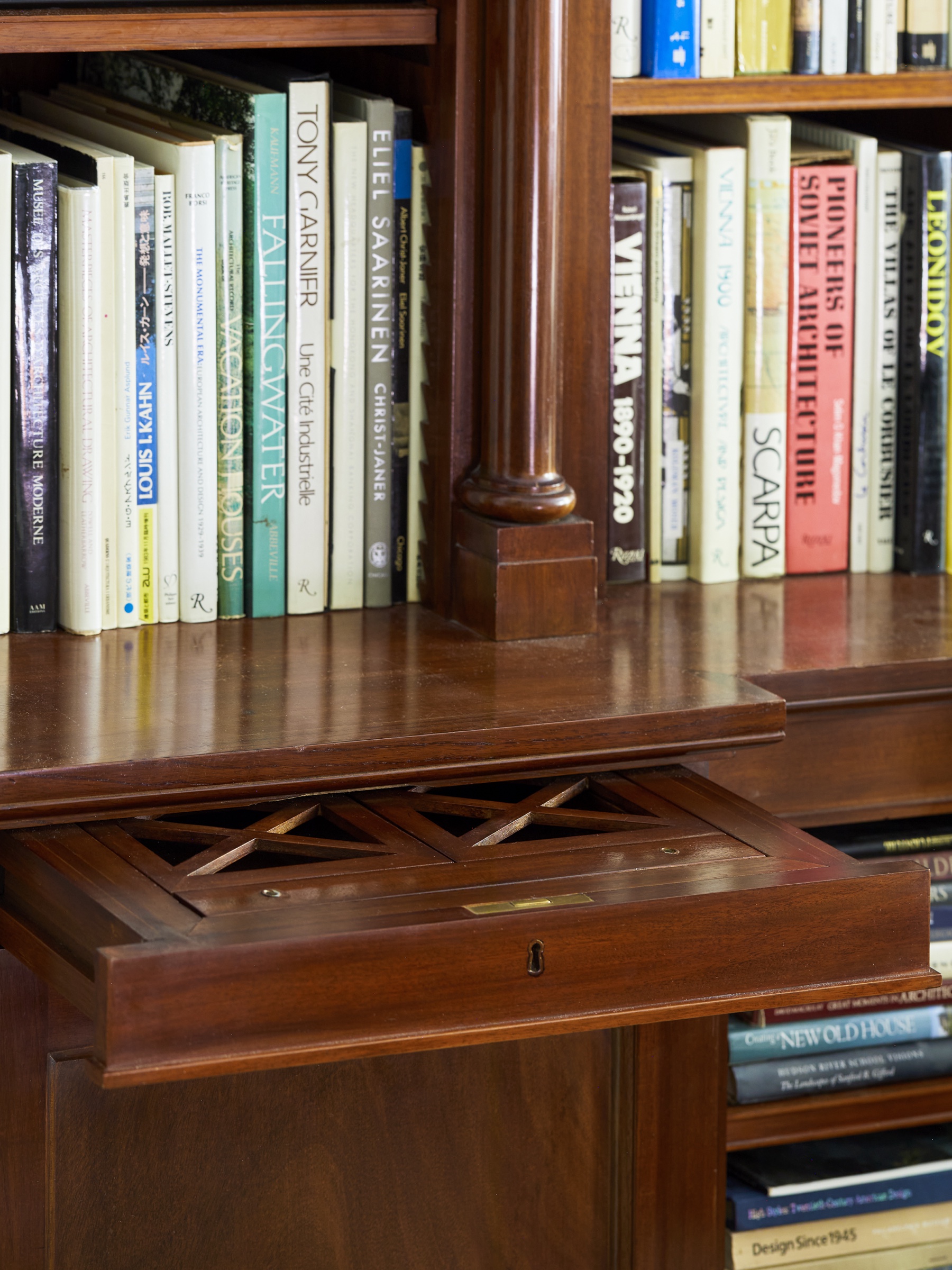 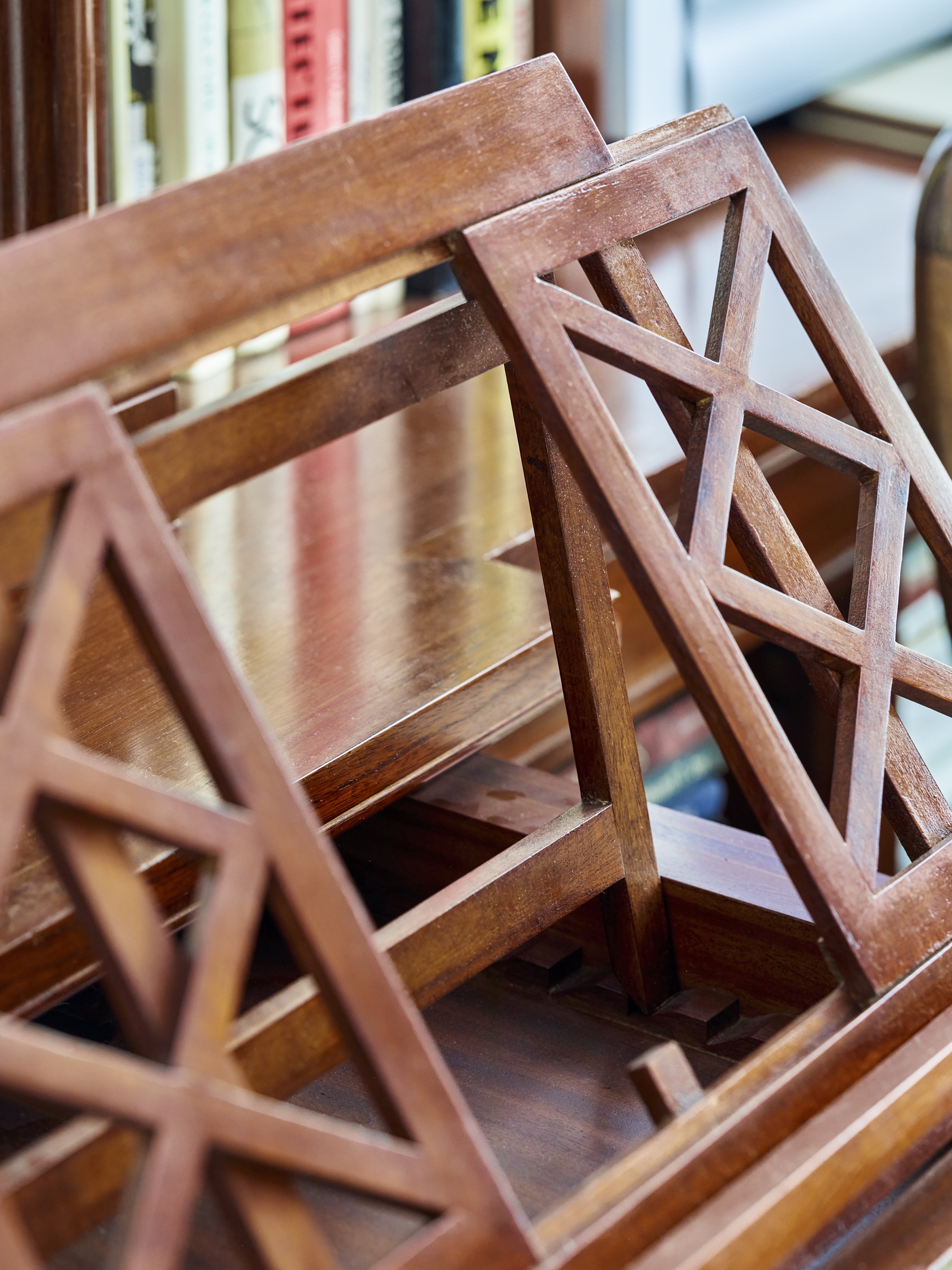 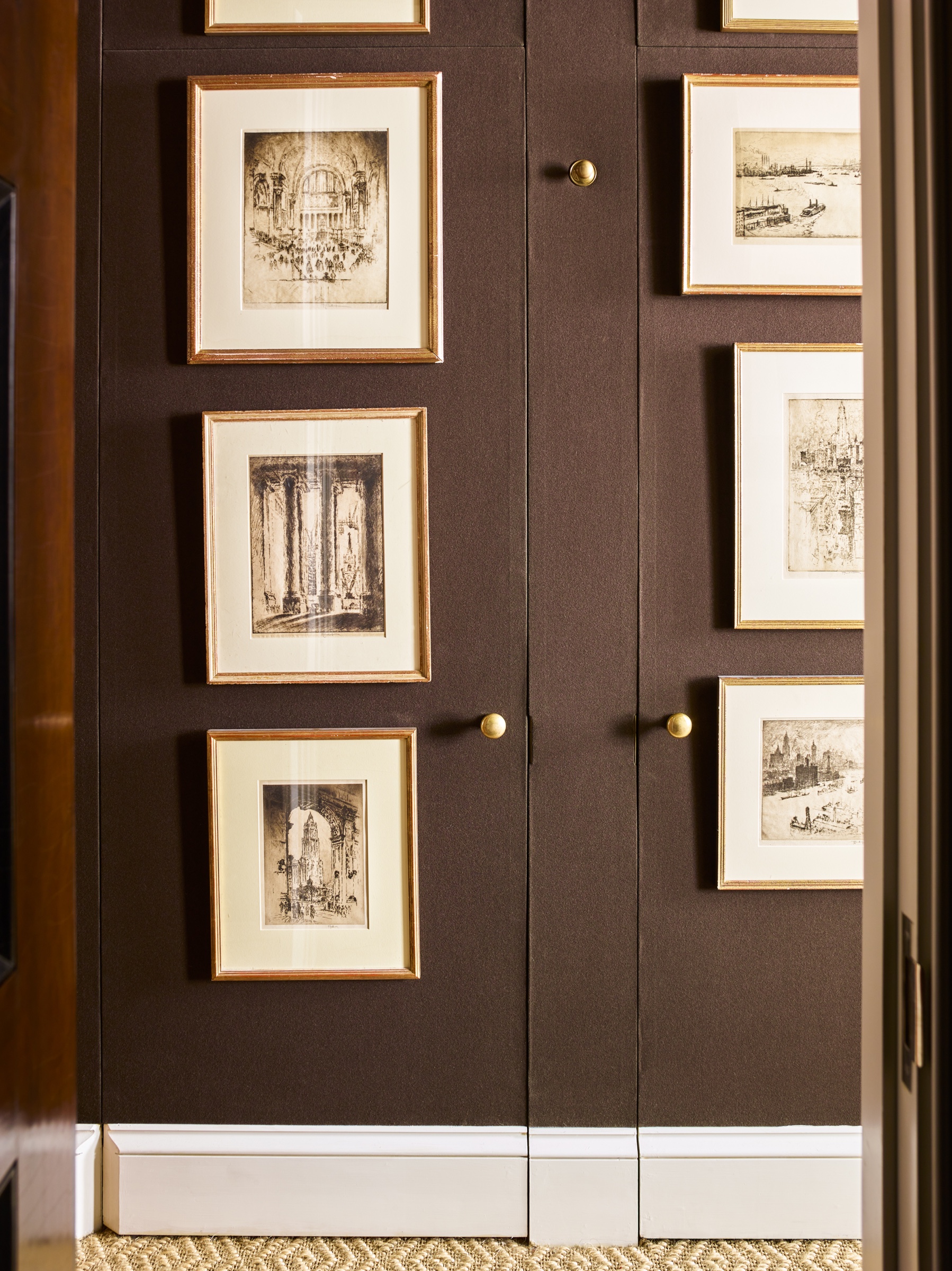 To see the apartment as it was when Gil first renovated it over 20 years ago, please read the story in House & Garden here >. Architectural Digest featured the apartment’s latest evolution in a story you can read here >.